BOOGER RED is part drama, part shaggy dog investigation, part nonfiction examination of an infamous case involving small-town swingers, foster care profiteers, and allegations of child sexual abuse that sent shockwaves through a Texas town. Onur Tukel plays a newspaper reporter named Onur Tukel who travels to East Texas to uncover the truth behind the notorious criminal case, but when the facts force him to confront his own past, his revelations lead him to measures that may change the course of his life, and those of the people involved with the case, forever. 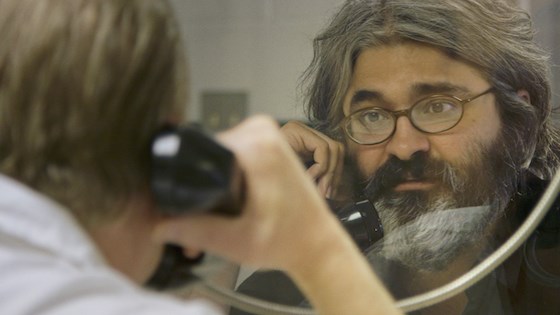 Director Berndt Mader spoke with Montclair Film Festival 2016 about his intriguing film and fascinating creative process behind it.

How do you describe BOOGER RED in your own words?

Berndt: This is a little tricky. I describe BOOGER RED as a hybrid narrative/documentary. It’s mostly a narrative film, but with documentary components. In the film we have a fictional reporter who is investigating an actual criminal case that happened in real life. And as a reporter would do, he seeks out the actual people involved and asks them about the case. Those individuals are the real-life defendants, attorneys and people involved in the case. So fiction meets non-fiction in our film, which we think is a new way of telling a true crime story like ours.

Berndt: I read Michael Hall’s Texas Monthly article that detailed this story of the Mineola Swinger’s Club trials that happened in east Texas in 2010. It was all surreal and seemed stranger than fiction. There were characters with names like Booger Red, a real honest-to-God swingers club operating in the heart of the Bible belt of east Texas, wild accusations of witches on broomsticks, silly pills, canine murders and flying chickens. There was also a foster mother claiming that her foster kids were trained in a “sex kindergarten” at Booger Red’s trailer. It was all just so outrageous, wild and surreal that I just had to look into it further. And the more we dug, the more questions we had about whether this had actually happened at all. Maybe it was too strange to be real, and that’s what the film investigates. It was all just fascinating to me, so I decided to proceed with the film.

Now, why we decided to tell this story in this way is another question—to blend fiction and non-fiction. Originally, we were planning on doing a straight documentary of this story. But, as we started reaching out to the actual people involved, it became clear very early that no one from the prosecution’s side of the case would talk to us. Documentaries are often about access to your characters, and here one entire side of the story wouldn’t give us access. So, we decided to develop the fictional reporter character, who at least would give us the opportunity to show our own struggle in getting that side of the story. In creating the fictional reporter, we were able to dramatize scenes to at least show the roadblocks we hit in trying to get the prosecution’s side of the story, if we couldn’t get them to actually be in the film.

What kind of research on criminal justice and the case itself did you have to do in order to accurately represent the events occurring in the film?

Berndt: Lots and lots. As background research my co-writer, Johnny McAllister, and I travelled several times to east Texas. We of course talked to the defendants and attorneys involved, but we also acquired pages and pages of “discovery” from the case that we sifted through. We read hundreds and hundreds of pages of testimony to discover how all the pieces of this story fit together. Some of it made sense and had a logic to it, but much of it raised questions about whether there was enough evidence, if any, to prosecute this case.

Do you feel the final product of BOOGER RED achieved your original vision for it?

Berndt: Man, I hope so. I think, because of the documentary elements, we didn’t fully know how this was going to shake out. But yes, in general, I think we were pretty successful in executing the film the way we envisioned it. It was tough for sure—pursuing the hybrid angle—but we think it turned out very much like we envisioned it. There was originally more to the fictional side of the story. But, in the edit, we realized that he documentary parts—the real people telling their real life stories—was hard for the fictional elements to compete with. There was just so much weight to their true stories, that too many narrative devices or subplots felt less compelling in contrast. So, we pulled back on the fictional elements quite a bit, allowing the documentary moments to shine through a bit more and carry a large load in the storytelling.

What were you looking for in an actor during the casting process?

Berndt: I was looking for a maniac, and low and behold found him in Onur Tukel!! No, Onur is amazing. He’s the most curious person I know. He’s always asking questions and poking around to discover things about those around him. So I felt he would be a perfect journalist. Also, he’s really disarming in a way that I knew we need with the weight of the subject matter in the film. Not that he would turn his journalistic interviews into a laugh session, but he is able to bring a bit of levity that puts people at ease. I think that was really helpful in getting very open and natural answers out of the actual real defendants he interviews in the film.

As a seasoned director, do you have one piece of advice for aspiring filmmakers?

Berndt: Outrage. I’ve been most impressed and inspired by how outraged our audiences have been. They can’t believe that the justice system could so grossly fail people. And I think that’s an appropriate response in this case and so many others where the system breaks down—not from honest mistakes, but from a deliberate disregard for the facts and purposeful circumvention of justice.

Director Berndt Mader and lead actor Onur Tukel will attend the screenings below.