The incomparable Margo Martindale has been seen in countless notable films of the past two decades including MILLION DOLLAR BABY, DEAD MAN WALKING, NOBODY’S FOOL, LORENZO’S OIL, THE HOURS, PRACTICAL MAGIC, and AUGUST: OSAGE COUNTY. Martindale’s work on The Americans most recently won her an 2015 Emmy for “Outstanding Guest Actress in a Drama Series,” and she received the “Outstanding Supporting Actress in a Drama Series” Emmy in 2011 for her portrayal of ‘Mags Bennett’ on Justified. Margo recently wrapped the final season of CBS’ The Good Wife and begins shooting her new Amazon show Sneaky Pete this summer. 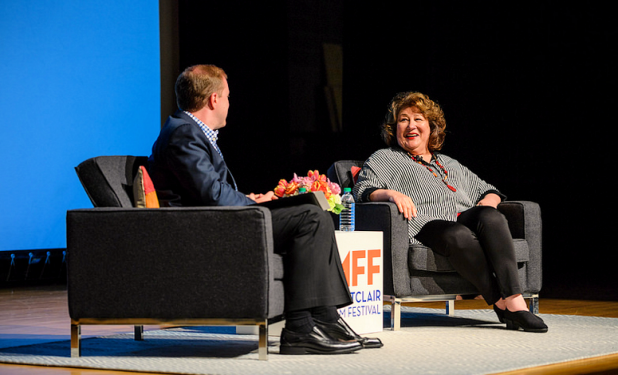 Montclair Film Festival 2016 was absolutely delighted to talk with Margo last Sunday at the MKA Upper School about her extensive and distinguished career in acting. Moderated by television writer Jason Lynch, here are some wonderful highlights from the In Conversation series, presented by Audible.

“I waited all my life to get all this work, and I love every moment of it.”

On the Off-Broadway production of Steel Magnolias: “We didn’t know what we had landed in… we didn’t know it was a comedy until we got in front of an audience, and people went wild, and then everybody from Hollywood came to see it, and then I got in the movies. That’s really how it happened.”

“I remember [during LORENZO’S OIL] being so calm and thinking, ‘This is it!’ Not that I’d made it, but this is what I want.”

On working with Paul Newman on NOBODY’S FOOL: “I was so shy to sit at the table having lunch with Paul Newman that I took my lunch and sat at another table… We got to know each other on the re-shoots. And then I got to die in his arms on the next movie, so that was great.”

On Clint Eastwood: “He’s fabulous. Three shots and you’re out. He says, ‘Just do what you did, Margo.’ He wants to get to the golf course.”

“When MILLION DOLLARY BABY came out, and I got really nice notices, and I had just come off Cat [on a Hot Tin Roof on Broadway] and for six months I didn’t get a job, I thought, ‘Wow, I’m not back to square one again, am I?’ Show business is not like any other business; you’re almost always back to square one. I think I finally stopped being back to square one after winning an Emmy.”

On Mags Bennett: “That part came to me easier than anything I’ve ever done. It was so simple for me. I didn’t have to reach to be anything but what I am. I didn’t have to change my voice. I could use all of my lower register. I didn’t have to put on airs of any kind. I could wear a big belt around my big belly and put hammers and things in my waist. It was the most free I’ve ever been. It wasn’t challenging. It was like flying. I hope in my life I get to do something that fits me so well again, but I’m not sure I will.”

“[Winning the Emmy in 2011] was like nothing I will ever get to see again because it was so new. It was fabulous, so fun, and I don’t think anything will ever feel as good as that felt.” 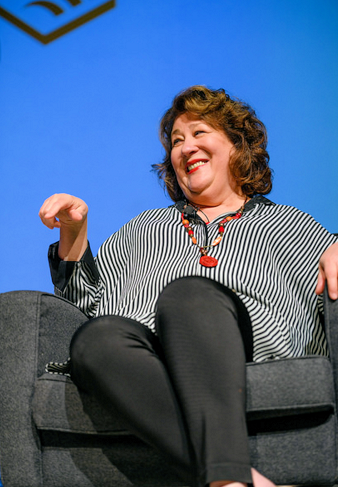 On Patrick Wilson: “Working with him I think is the most fun I’ve ever had. He is the funniest, most wonderful person.”

“We were coming home from the Emmys, and I won for The Americans. My husband always checks Wikipedia and stuff like that… [The Emmy] wasn’t on there yet, but it said that the past year and a half Margo Martindale spent in prison for armed robbery. My character on Bojack Horseman, Margo Martindale Character Actress, did go to prison for armed robbery… So we got that taken off real fast!”

On John Krasinski: “We did a Marshall’s commercial together while he was still in college. He was so adorable, I said to him, ‘I don’t have any money, but if I did, I would bet it all on you.’ He didn’t even have an agent. Then the next year I was doing Cat on a Hot Tin Roof. John came to see me in it a couple of times. He said, ‘I got a job! I got a pilot, it’s called The Office!’ And I didn’t see him ever again until he called me and said, ‘Would you come do [THE HOLLARS]? I will always remember what you said to me.’ He directed it, Jim Strauss wrote it, and it’s just a perfect little sweet, not sappy movie that will be out August 12.”