In Richard Curtis’ LOVE ACTUALLY, nine intertwined stories examine the complexities of the one emotion that connects us all: love. Montclair Film Festival 2016 was privileged to present a special screening of the film last Saturday as Richard and his life partner Emma Freud provided live commentary, sharing stories and secrets from behind the scenes of this beloved classic. 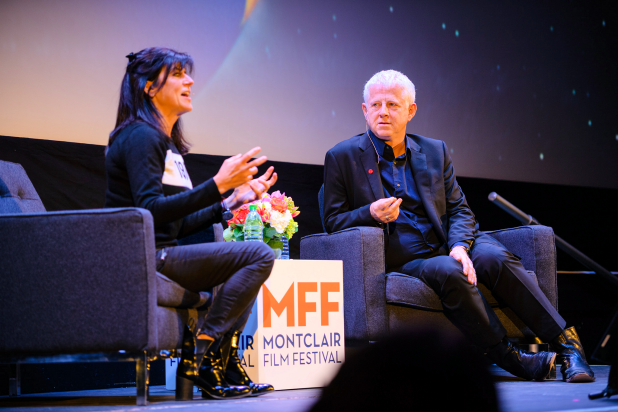 We’ve put together our favorite quotes below!

“Now about this first section—the bit in the airport where people hug each other—it was very interesting, we actually hid in a little black box at the airport and we actually shot through a little hole. Anytime we saw something that we thought was vaguely moving we’d send out a production assistant with a little card saying it was fine [to use it]. What you see there was all edited by Emma, it took one day to knock it off and we never changed it.”

Regarding the Billy Mac aging rocker: “I wrote this part for two very famous people and I couldn’t decide which one of the two to play the part. So when we had the read-through I said to Mary [Selway], who cast the movie, ‘Can you get a nice actor who I will definitely not cast?’ And she said, ‘How about Bill Nighy?’ And I’ve seen his work and I didn’t care for it. And so I thought he’ll be perfect. Bill came along and did it so perfectly that we cast him that afternoon. And he’s been in everything I’ve done since.”

“The strange thing about LOVE ACTUALLY is that almost the happiest moment of my life is the original read-through of the film that went really, really well. It was just the actors we cast sitting around a table. And then we shot the film, and the edit of exactly that film was unwatchable, it was the worst ever. So all this intercutting of all these stories was not how the movie was planned. It was meant to be one long scene and then another and there was no intercutting, but the problem was it didn’t work at all. It worked as a script but not as a film. So through six months [of editing] in a sort of three-dimensional chess game we came up with different orders of scenes and what you’re watching now.” 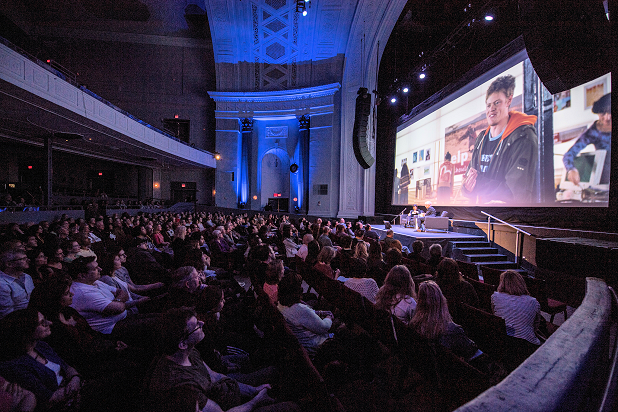 On the set built to replicate 10 Downing Street, the Prime Minister’s (Hugh Grant) residence: “That was the most expensive set we used for the film, we built it and it was up for a few weeks. It turned out five other movies used it.”

On the funeral scene: “The inspiration for that scene came from the funeral for Jim Henson, and all the people who worked [with Jim] brought their puppets. So what happened was there was this huge audience of people and then all of a sudden there was this audience full of Muppets singing together, Big Bird singing! So that’s where I got this idea of everyone bringing their instruments and playing.”

“Keira (Knightley) was just delightful, she is exactly what you see, just charming and smiling. She was maybe—what—19 years old? I asked her what she was doing next and she said, ‘Some dodgy pirate movie.'”

Regarding the scene set in France with Colin Firth: “This was one of the happiest times of the shoot; we actually went to France for this. That lake where Colin loses his script is about 11 inches deep. No one inspected the depth of the lake! So you see them sort of lying around pretending to be swimming. And all the stammering that Colin does we should have gotten 5% of his pay for THE KING’S SPEECH—he was practicing in our movie!”

Regarding the Juliet (Keira) montage wedding videos scene: “This whole sequence obviously was stolen from CINEMA PARADISO. I’d watched that and it suddenly occurred to me that the bit at the end where they edit together the kisses from the whole movie was perfect. And I love these scenes, as none of these scenes were shot by me. We just hired this guy and said, ‘Walk around and take beautiful pictures of Keira,’ and he did such a lovely job, and I love that scene.”

“When we were auditioning FOUR WEDDINGS AND A FUNERAL, we couldn’t find anyone to play Charles, and I didn’t want Hugh Grant to audition for the film because I thought he was too handsome, and I thought it would ruin the film to have a guy that handsome who wouldn’t have a girlfriend. And finally he came in and it was like the difference between night and day. He did every single line absolutely perfectly and we just had to accept the fact that he was moderately good looking. It turned out to be a good move for both of us. It will be interesting to see how he does in the new movie with Meryl Streep where he plays his age [FLORENCE FOSTER JENKINS].”

“The funny thing about watching movies after you’ve made them is that it’s completely impossible to see them as fiction. What it is for me—it’s kind of like watching various sections of my diary of a very difficult 12-week period, and all I can remember is a huge fight with the lighting man because it took him three hours to light the set and then we did two takes or something and he says, ‘If we go on like this mate, we’ll never get finished today.’ And I had to pull him aside and say, ‘If it didn’t take you three hours to light this scene we’d be nearly finished.’ So while you’re watching two people fall in love I’m thinking I could f—ing kill this cameraman!”

“One of the first films I ever made was with Emma Thompson—THE TALL GUY, and I’d known her as a sort of sketch actress, and she wasn’t the world’s best sketch actress, there was something slightly old-fashioned about the way she performed. I remember again, showing my general bad taste, that I didn’t want her to audition for the film. We auditioned other people for the film, but within 12 seconds of watching her audition—when she was 23—you could tell she was going to be one of the great movie actresses of our time.”

“I’ve increasingly realized that when I was writing this film about ‘love’ and you ‘do the math,’ you realize that love comes in various shapes and sizes. Now I look back I think it’s as much a film about friendship and other kinds of love as it is about the romances. I tried to pepper this movie with family and friends, and that’s as much what this film is about as all the romance.”

On Rufus’s (Roman Atkinson) scene at the jewelry store: “Now this was a very bad night. What happened was that Rowan had several things to do, but he made this decision that he would take as long as he liked, so each take took fifteen minutes. And he kept doing them again and again, and then he’d break out of character and say, ‘Which one was funnier, do you think we should do that one again?’ And Alan Rickman went bananas by the end of the night because he just had to stand there and react!”

On one of the key Christmas songs in the movie: “I wanted to get Baby Please Come Home by Darlene Love, but in order to get a Phil Spector song you have to get Phil Spector’s personal permission, but he was on trial for murder, and didn’t have time to answer my request…”

On Karen’s (Emma Thompson) crying scene in the bedroom after learning the jewelry Christmas present was not for her: “This was the easiest scene in the film for me. I just said ‘action’ and I did three shots on each level [wide, medium, close].” Emma: “She did the scene 9 times and she cried in every one.” 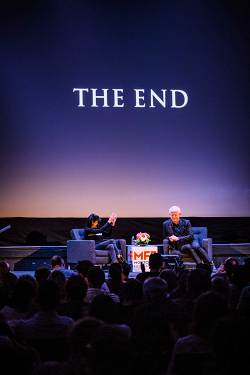 “All my films are written to music. Basically, they’re all very shallow! I need the music to cheer me up because I’m a very deep person in real life. So this is the song I listened to basically every single day when I was writing the film. It got me out of my ‘difficult household.’” (Emma smiles back. The song is All I Want For Christmas is You.)” Emma: ‘Everyone thinks she [the young girl singing the song at the school Christmas pageant] is lip-synching, and she was nine or ten years old, but that was her.”

“Rowan is at the airport scene as actually, in an earlier draft, he was sort of a Christmas Angel, like Clarence [in IT’S A WONDERFUL LIFE], but most of that was cut out, but he is helpful at the airport and that’s why he’s there.”

Click here for more photos from this special event!