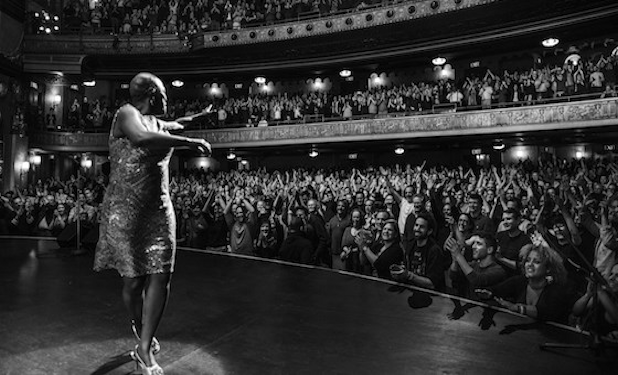 In 2014, on the eve of Sharon Jones and the Dap Kings launching a new album, Ms. Jones faced her greatest challenge yet; a cancer diagnosis that brought her career to a stand still. Miss Sharon Jones! documents the singer’s battle to not only heal her body but continue to drive the Dap Kings toward the musical summit. 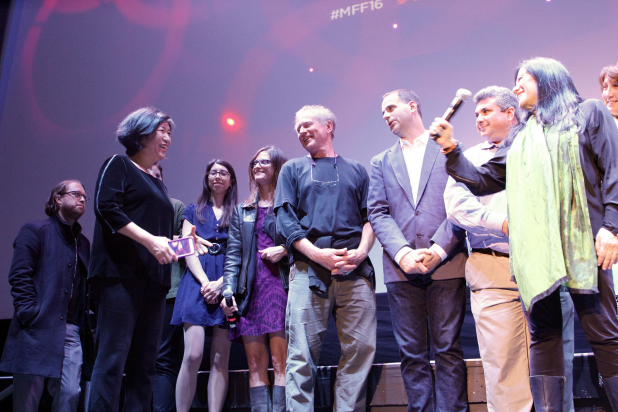 Here are some highlights below.

Director Barbara Kopple on the making of Miss Sharon Jones! before the screening and working with the film’s main subject: “Making documentaries like this, you want to stay attached to them. You want to watch how they grow and how they change. Having the privilege of making Miss Sharon Jones! was one of the most passionate and beautiful experiences.”

Barbara Kopple on meeting Sharon the day she was having her hair cut and shaved in preparation for chemotherapy treatments: “We bonded that day because when you go through something like that and you have people around you and you’re starting to make this huge transformation in your life, something happens. We just felt so privileged and so honored to be in the life of Sharon Jones.”

Barbara on how the crew captured Sharon’s performance energy on camera filming the first show Sharon performed after her chemotherapy treatments in New York City: “That was really extraordinary because Sharon did not know who she was going to be when she went out there. She didn’t know if she was going to be able to move or remember the lyrics. She was just very nervous. She went out there, of course, and she killed it, but also the Dap Kings and the Dappettes followed what she was doing. When she was out of breath they would play until she got her breath back. I think for me that was so courageous and so wonderful for her to take that risk.” 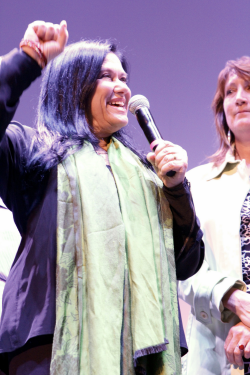 The last scene of the film is from a concert Sharon and the Dap Kings played in Augusta, Georgia. Producer David Cassidy credited Gary Griffin’s cinematography for capturing Jones’ energy: “This guy—that was the best thing he had ever shot for us in 12 years—was that one little moment, that scene . . . . that’s not meant as a joke, that’s meant as a compliment. I can distill it down; it’s just so transcendentally brilliant the way that he shot that moment and that song and that stage.”

Responding to Cassidy’s question about how he shot the concert footage in Augusta, Griffin said: “Kopple has amazing instincts and told him to film the show. I remember Jean Tsien [editor] in the editing room said, ‘Wouldn’t it be great if she in the middle of Get Up and Get Out, she stopped and started to witness to the crowd?’ I went, ‘Jean, that’s a great idea’ and it’s exactly what she did. I mean it was like (turns to Tsien) you were channeling over there and it was just amazing.”

Kopple, after an audience member asked about Sharon’s wardrobe: “She’s so great when she’s trying things on. She puts heels on and she models in front of the window and the mirrors. She just loves it. She’s a joy to take anywhere.”

Griffin on an audience member’s question about filming Sharon in the church when she’s witnessing: “When I said when you fall in love with Sharon, it’s an emotional connection and you just feel her and your part of her.”

Cassidy’s mom asked if Sharon had finished the paint-by-number piece that she worked on when she was ill and he said she surprised him by gifting it to him and it now hangs in his office: “It’s just beautiful and one day hopefully it will be in a museum after she’s won her Grammy and sold a million records [in the film, Jones said that she wants to sell a million records].”

Saxophone player Neal Sugarman on Sharon’s performances after her illness: “I think Sharon’s singing harder and better than she’s ever sung in her life. As David talks about in that last scene, that to me is what we’re seeing every night. There’s something that’s happened where she’s just even more grateful every night that she’s singing and everyone should take advantage of seeing this American gift that we have.”

Backup singer Saundra “Saun” Williams on meeting Sharon and fellow backup singer Starr Duncan Lowe: “Starr and I and Sharon, I call us the ‘trifecta.’ It’s because for some reason the universe saw to bring the three of us together years ago. I met Star in 1986 at an open mike and we met Sharon together in ’91 and just to be a part of this is amazing.” 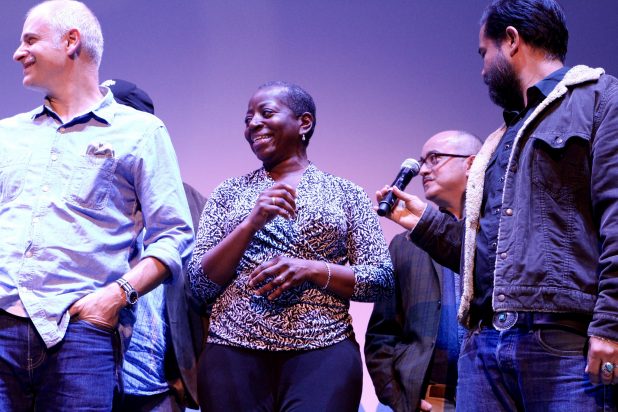 Kopple on Sharon’s recent birthday: “As Jean mentioned, on May 4th, Sharon turned 60. She was in Augusta and she was performing with the James Brown Band and was just knocking herself out. She had lunch on her birthday with James Brown’s daughter and so she is so happy.”

Check out more great photos from our closing night film!