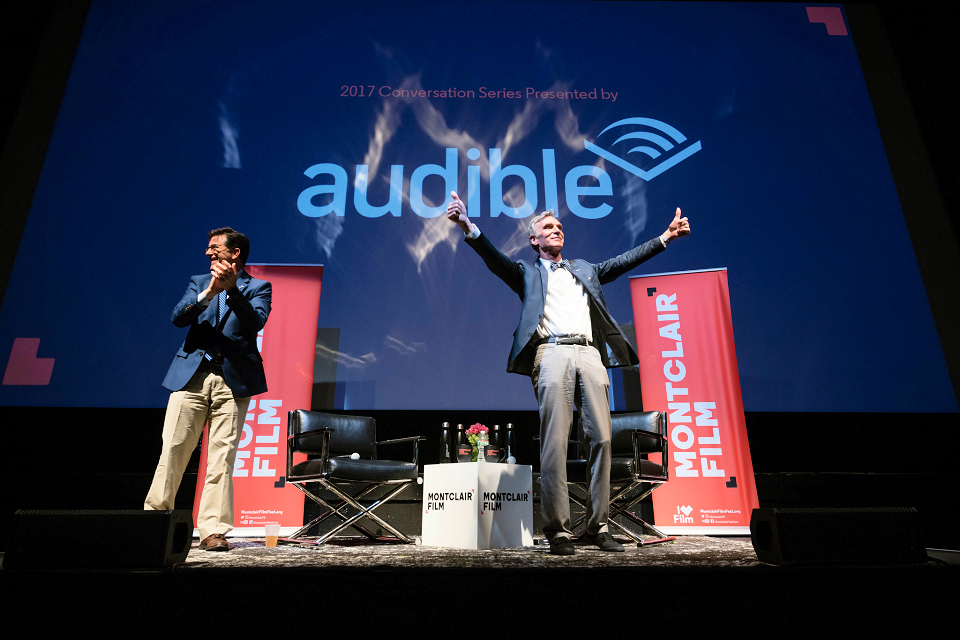 With his hands-on, accessible, and fun approach to teaching, Bill Nye helped countless kids fall in love with science. In the process, he became a celebrity and a hero to millions over the years. When his TV show ended in 1998, Nye turned his attention to larger issues—which, as Seth Gordon, the producer of the new documentary BILL NYE: SCIENCE GUY put it, consist merely of “trying to save the world.” With humor and frankness, the film, directed by David Alvarado and Jason Sussberg, delves into Nye’s past (his childhood, early days in broadcast); relationship with former collaborators on his legendary series; and three current passions: battling science illiteracy, fighting climate change deniers, and implementing Carl Sagan’s dream of space exploration through an innovative, low-cost method called solar sailing. Along with interviews with his colleagues and such well-known scientists as Neil deGrasse Tyson, the film also looks at Nye’s “survivor’s guilt” over being the one member of his family unaffected by Ataxis, a genetic disease that struck his father and siblings.

A crucial question that runs throughout the film is what role Nye’s hunger for fame has played throughout his career—and is playing now as he makes decisions about how to confront creationists and others who deny scientific fact in favor of misinformation. His high-profile debates with such figures as Ken Hamm, builder of the Creationist Museum and the “Ark Encounter,” have sometimes had the opposite effect than Nye intended, bringing his foes much-needed publicity and money.

Following the documentary was a post-screening discussion between Nye and Montclair local and Late Night host Stephen Colbert. Despite the pressing, life-endangering issues examined in the film, the conversation was as lighthearted as one would expect when America’s foremost humorist meets a man who happily dropped watermelons from buildings in order to demonstrate how gravity works. Colbert began by asking how we got to this Bill Nye—the man we see today. Laughing, Nye spoke about how his friends had pressured him into entering a Steve Martin lookalike contest… which he ended up winning. Noting that his parents were funny, and that comedy was valued in his family, he decided to continue on that path doing open mics at Seattle clubs. He got a job writing jokes for a local TV show—until one day a guest bowed out and left them with six empty minutes to fill; an eternity in TV time. (That particular guest was Rita Jenrette, associated with Watergate, the ABSCAM scandal, and having sex on the Capitol steps; Colbert dryly pointed out she came from his hometown of Charleston, South Carolina.) Deciding that liquid nitrogen was funny, Nye created a science-based routine to fill the space. This was in 1987, and from that point on, Nye “started doing these demonstrations that were like magic, but I felt it would be more fun and interesting if it were real.”

After quoting Isaac Asimov on the “cult of anti-intellectualism in the US” and “the idea that my ignorance is just as good as your knowledge,” Colbert queried Nye on why he thought this was so. For Nye, anti-intellectualism flourished because false ideas (like astrology or that emergency visits increase during a full moon) “seem reasonable” to people, and that it can take “at least two years” of hearing the truth for it to fully sink it. For that reason, he stressed the importance of “getting to children before they’re 12.”

Colbert further wondered why this strain of anti-intellectualism persisted despite the fact that science and technology were responsible for the United States becoming a global superpower. Nye teasingly responded: “Well, you’re the talk show host!” More seriously, he blamed the consolidation of media, which Nye felt had helped create a “world that has grown so polarized, especially in relation to climate denial, because of the effort of the fossil fuel industries” like coal. For him, messages that should have nothing to do with each other have instead become conflated: “What is it about mining coal that makes you think that I’m against your religion?” By contrast, Nye praised the passion of the many scientists who drill through layers of ice for research, and whose work helps us determine CO2 levels in past ages and compare it to our levels today. One man showcased in the film was prominent climate-change denier Joe Bastardi, a combination meteorologist and bodybuilder. Nye had frequently tangled with Bastardi (although he seemed to have more affect on Bastardi’s son, currently studying meteorology at Penn State). By the end of the film, Bastardi seemed to entertain some slight doubts about his position. Colbert, who had welcomed Bastardi as a guest on The Colbert Report, referred to him as a “wonderfully frustrating individual to have a conversation with.” Nye wondered: “do you think I got to him?” But ultimately, Nye felt his own confusion over the fact that Americans have enough of a fascination with science to love the CSI TV franchise, but not enough to accept that we can understand what’s happening with our own climate.

Colbert pointed out there were facets of the science story that the film discussed: creationism (do you accept science on any level?), climate science, and the solar system. Nye stated firmly that they were really all one: we determine the age of the earth via rocks, and each aspect of science builds on the past. “It’s so cool, it’s so exciting.” Taking it further, he made the poetic yet scientifically true statement that “we are made of stardust . . . and we are one of the ways the universe knows itself. It fills me with reverence every day.” In astonishment, he pointed out “there’s a flat earth movement! Dude!” Addressing another of his passions, Nye spoke about the Planetary Society (an organization founded by Carl Sagan, he currently serves as CEO) and space exploration, and how it would change our view of the cosmos. “If we were to discover evidence of life . . . it would change the course of human history. Everybody would feel differently about what it means to be a living thing in the cosmos.“

Colbert asked Nye what was the hardest part of viewing the film, which Nye said he had seen four times so far. Nye admitted it was the footage of an audition tape he had made in Portland, Oregon. (He failed the audition and instead returned to Seattle and the creation of Bill Nye, Science Guy.) Also difficult for him was hearing some of the film’s experts speak about the possible negative fallout of his debates, and wondering whether he’d done the right thing. Referring to our current president, Colbert wondered how we could possibly get Trump to change his mind on climate change; Nye felt that space exploration might be the solution as “it brings out the best in us.” He noted that Trump hadn’t yet appointed a head of NASA and that a scientist there might influence Trump on other related issues. Wryly, Nye said “there is some evidence to suggest that the president changes his mind about things.” He also noted that many of the red states are dependent on NASA contracts—and that a number of people in these conservative areas are tired of some of the toxic effects of coal on their environment and health. When Colbert then queried him on which scientist he admired most, Nye unhesitatingly chose Rosalind Franklin, whose X-ray images allowed us to see the structure of DNA.

Asked whether he had ever succeeded in changing someone’s mind about science, Nye mentioned an episode of his upcoming TV show, Bill Nye Saves the World, which included an anti-vax person who transformed completely into a believer after her unvaccinated family became sick. Nye also averred that because he himself changes his mind about things, he can convince others to change their minds, too. As for the government’s role in advancing scientific discoveries, he exclaimed that “it’s in the freaking US Constitution, Article 1, Section 8: you shall promote the progress of science and the useful arts!”

Colbert ended by asking him what piece of technology he wouldn’t have imagined. Nye happily claimed “my phone tells me which side of the street I’m on!” To appreciate laughter, he likened it to the communicator on Star Trek before enjoying a rousing ovation from the audience.