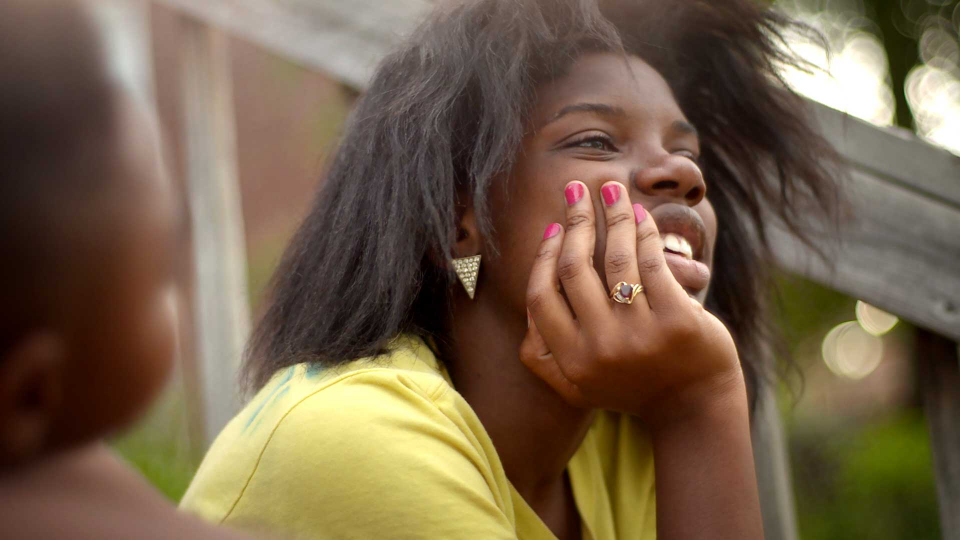 In FOR AHKEEM, national news coverage continues to escalate around the Michael Brown case in nearby Ferguson, Missouri. Deep down, Daje “Boonie” Shelton knows that the Brown family, like so many others, would probably not see justice served for the death of their unarmed son. Countless black boys she grew up with from the neighborhood to the schoolyard had their lives cut short, far too soon–including her classmate James and her cousin, Cary, an emerging college scholar, who was shot 25 times by a cop.

Pregnant with her first child, the 17-year-old begins to reflect heavily on her own life, her boyfriend Antonio’s choices, and what it will be like to raise a black boy in America. “Everybody think you all cute and adorable now, but when you grow up, it’s like, they all look at you different.” With the support of her family, friends, teachers and administrators, the alternative high school student is determined to beat the odds and create a better life for her son no matter what. How do you describe FOR AHKEEM in your own words?

Iyabo: FOR AHKEEM is about standing your ground and strength of self. I was really inspired by Daje’s reaction and passion around Ferguson, and her seeing how things in the world affect her personally. Being defiant about how people see her and how she’s expected to exist in the world. I found that really empowering–even as an adult.

What drew the directors to this particular story?

Iyabo: Our directors, Jeremy S. Levine and Landon Van Soest, were introduced to executive producer Jeff Truesdell, who is a writer for People out of St. Louis. He wrote a story about Judge Jimmie M. Edwards, founder of Innovative Concept Academy, an alternative, last-resort school for juvenile offenders. They initially wanted to focus on education and the juvenile justice system, but once they met Daje, they realized that there is so much more going on beyond academic pursuits.

Impressed by her natural charisma, openness, self-awareness, and clear desire to express herself eloquently, they wanted to be in this girl’s life and see what it’s really like to be a young black girl coming of age in the divided city of St. Louis.

What makes FOR AHKEEM different from other teen stories about coming-of-age?

Iyabo: This film is special because it’s told by a black girl. We rarely see black women telling their own stories. Daje is a very complex person and very introspective. She masters thoughtfulness. Her journals and letters to her son Ahkeem make it special and reflect all the different dynamics of growing up thinking about your position in the world. Black teenagers are not represented in most media. I think any film that is trying to portray a more nuanced portrait from the voices of these kids is one that’s worth having.

Young people of color seeing themselves represented in art, in any shape or form is incredibly powerful because it’s showing a level of existence that has not been allowed for many generations of the past. This validates their importance to the world. It validates that they are interesting and that their thoughts and feelings are worthwhile. And their challenges are challenges, and that their success, however small it may seem to someone else, is a huge success for them.

What was the filmmaking process like dealing with such serious, emotional subject matter?

Iyabo: It took three years to finish the film. All that time spent and the openness that Daje, her family and school had in terms of their generosity, being very frank with us and open, allowed for a high level of intimacy.

Our directing team went through a lot of steps to make sure that everyone felt comfortable, to make sure they were checking their privilege to understand where they were and what they were bringing to the film. And what it represents and what it means for them to be a “white man” in the room with a camera, or in the editing room. They thought about that a lot. They also talked to Daje about it and she talked about it with her community.

This film has a powerful message and should be shown in schools across America.

Iyabo: We’ve shown the film to 1,200 kids so far, who were ecstatic about the film, and some inmates at a prison in New York. They were really impacted emotionally and began to see themselves in Daje and Antonio. We’d also like to work with judges and other judicial workers, administrators, teachers and police to have more compassion and understanding with the kids, especially when they’re experiencing trauma and going to school and expected to be totally normal and perfect. There’s a lot to talk about.

You started making films at age 15. What advice do you have for aspiring filmmakers?

Iyabo: It’s really important to pick the right projects and to think about what you’re going to gain in terms of skills at that time, and also what you’ll gain in terms of building a career. But once you’re there, be in the present. Be open to meeting people and making friends, because this industry is entirely built on friendship. Also, make sure your film crews are diverse and think about what you’re offering to other people.

Iyabo: The film was to serve as an inspiration and representation for people who might be experiencing the same situation–losing someone, teen pregnancy, challenges in school–obstacles in general. The idea is to pursue your dreams and make it through life’s difficulties, because it’s not the end of the world. You can still do what you want to do in life. I hope people will take away a strength of self and the self-esteem required to know yourself and to know where you belong, and what you should care about–once you stand up for it.

Iyabo: We’ve only had the film featured at festivals in Berlin and Tribeca–to a mostly white audience who gave really positive feedback, so I’m really hoping that the black community in Montclair will show up. I’m looking forward to the diverse audience in Montclair and to experience their reaction to the film.

For more information about FOR AHKEEM, check out the film’s website and Facebook. Also, learn more about how to get involved with Feedback Loop, a non-profit film organization, founded by Producer Iyabo Boyd.

Director Landon Van Soest and Producer Iyabo Boyd will be guests at the following screenings of FOR AHKEEM: May 6, 6:30pm, and May 7, 2:30pm, both at the Clairidge Cinemas. BUY TICKETS

Iyabo will also be a featured panel guest at the inaugural EMERGING BLACK VOICES program, May 6, 1:00 PM at Cinema505. This is a free event.