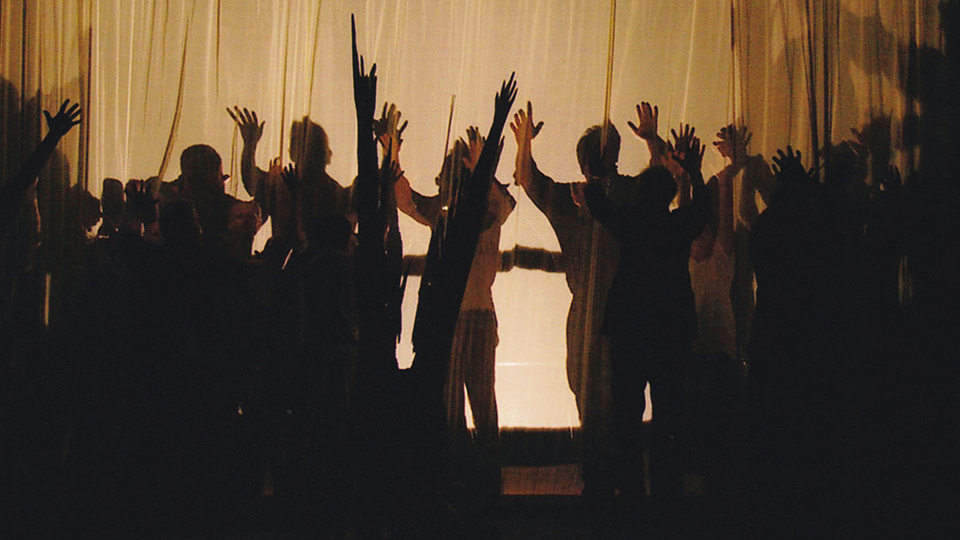 Directed by Jeff Malmberg and Chris Shellen, SPETTACOLO is the story of Monticchiello, a tiny hill town in Tuscany that found a remarkable way to document their history and confront their own contemporary conflicts—they turned their lives into a play. Every summer for the past 50 years, their piazza becomes a stage for the community and villagers from ages 6 to 90 to play a part—the role of themselves. An elegiac rendering of the changes in the economic and social landscape of the community, SPETTACOLO is a testament of the vital role theater can play in helping us all understand our lives. How would you describe SPETTACOLO  in your own words?

Jeff: It’s the story of a small hill town in Italy that has turned their lives into a play for the last 50 years. Every summer for the past 50 years, their piazza becomes their stage and villagers from 6 to 90 play the role of themselves.

Jeff: Chris and I ran into into this story completely by accident. We were on a vacation in the middle of making MARWENCOL when we bumped into this strange little town with a theater. So it just sort of hit us in the face. That said, I think we’re both attracted to stories about people who use art to deal with their issues. It’s not like they are making art as a means of self-expression—they’re making art to try to solve an actual problem. For me, those stories always manage to get at the real “power of art” that people like to talk about in ways that other art stories just can’t. That “power of art” idea is usually so abstract—the power to do what exactly? In both these cases, the creation of art is granting these people the power to actually transform their lives and understand themselves.

Could you say something about your use of archival material in the film, both filmic and photographic? How well documented were the town’s previous theatrical productions?

Jeff: The last 50 years of plays were actually extremely well documented, but a lot of these photos and films were sitting in a room in the town gathering dust. It became our job to make sense of this homemade archive and use it when we were shooting with the members of the town. I always thought of their archive as sort of a family photo album. You would show people in town these photos and the memories and stories would start coming out. So we wanted to shape that archival back into the film in the same way—as a sort of collective scrapbook of memories and experience.

Your film centers on the small, close community of Monticchiello, Italy. Initially, one man refers to “discussing our problems in front of outsiders.” How did you convince the community to participate in this film? Did they continue to feel that you were outsiders, or did that change as you continued to film?

Jeff: I can’t imagine what that would be like from the other side—two foreigners coming to try to “tell your story” would be a difficult concept for me to understand and agree to. They were always so trusting and kind. And of course then you want to pay back that trust with the film you make.

The play the town puts on dramatizes the country’s economic crisis, and particularly its effect on farmers and those without wealth. The “elders” are extremely sophisticated politically, perhaps due to their experiences during World War II. Is this true of the young people as well? Do they share the same view of the government and economic structure?

Jeff: I would argue that the political sophistication of the “elders” that you mention is primarily a function of their involvement in the theater. For fifty years, they’ve spent their summer evenings in the piazza discussing issues with their neighbors—exchanging ideas and learning to respect each other’s opinions and seeing other points of views. And as we all know, that’s in extremely short supply these days. The instruments of communications that the younger folks in that town now use don’t encourage that kind of thing. I always hoped that the younger folks in town seeing the film and understanding how their parents and grandparents chose to spend their time might encourage them to keep the tradition alive—we’ll see.

As a seasoned documentarian, do you have one piece of advice you’d like to offer aspiring filmmakers?

Jeff: Don’t be intimidated by any of the technical factors around filmmaking. It’s not about the camera or the gear—it’s about the connection you make.

Director Jeff Malmberg will attend the following screenings:
May 3, 6:30pm at the Clairidge Cinemas
May 4, 8:45pm at the Bellevue Cinemas
BUY TICKETS